As previously mentioned, for little mans first birthday party I really wanted everything to be pinterest perfect… but then life happened and I found myself scrambling Saturday morning to get our collective lives together. Given the heat and the inevitable chaos that seems to engulf my life, everything actually went pretty smoothly and we had a great day! Little man and company enjoyed the kiddie pool, indulged in some classic cookout chow, and just had a solid time spending the day celebrating the first year. 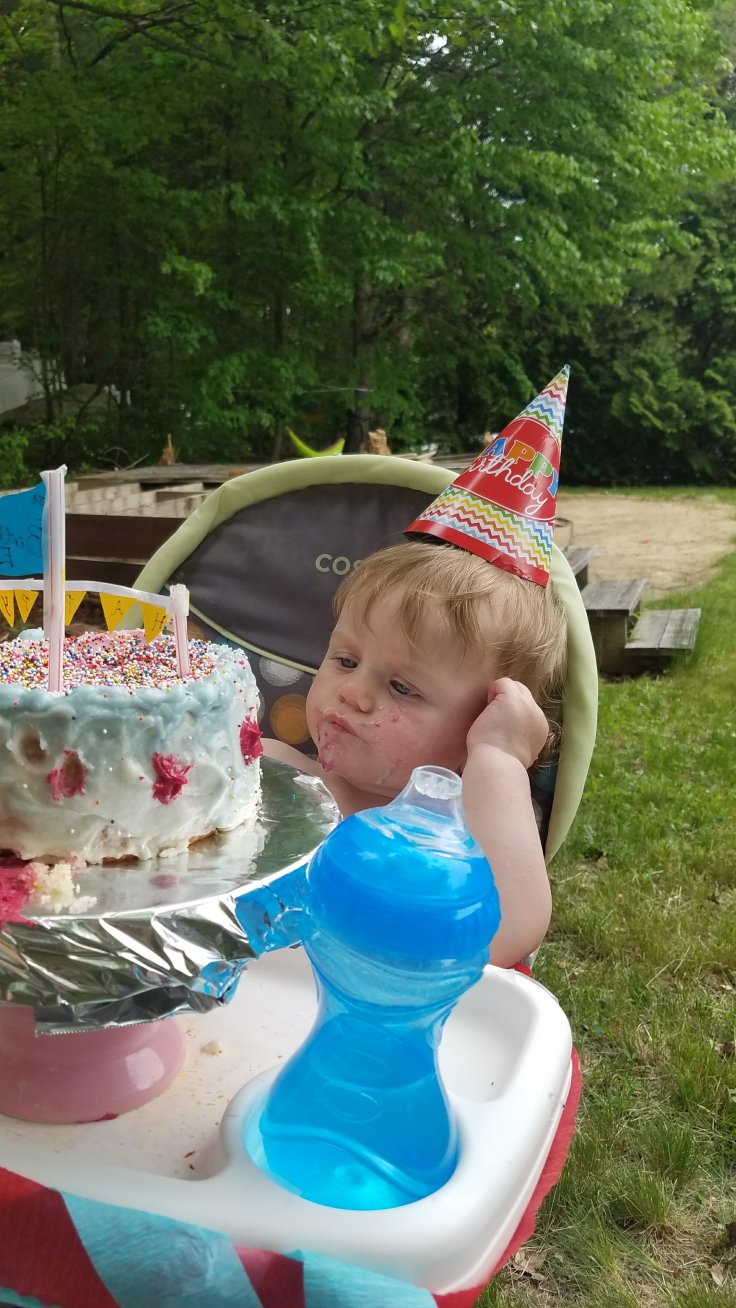 As the title states, this party definitely fell into the “lazy” mom category, with a passive theme and store bought cupcakes, somehow it still came together well enough that I wanted to share it with you! We planned on a Curious George theme and had some passive decorations, focusing more so on primary colors, the aesthetic was pleasing but not over bearing. There was no monkey cake, but I did make a small banana shaped cake to go with the smash cake that was engulfed in primary color fun. 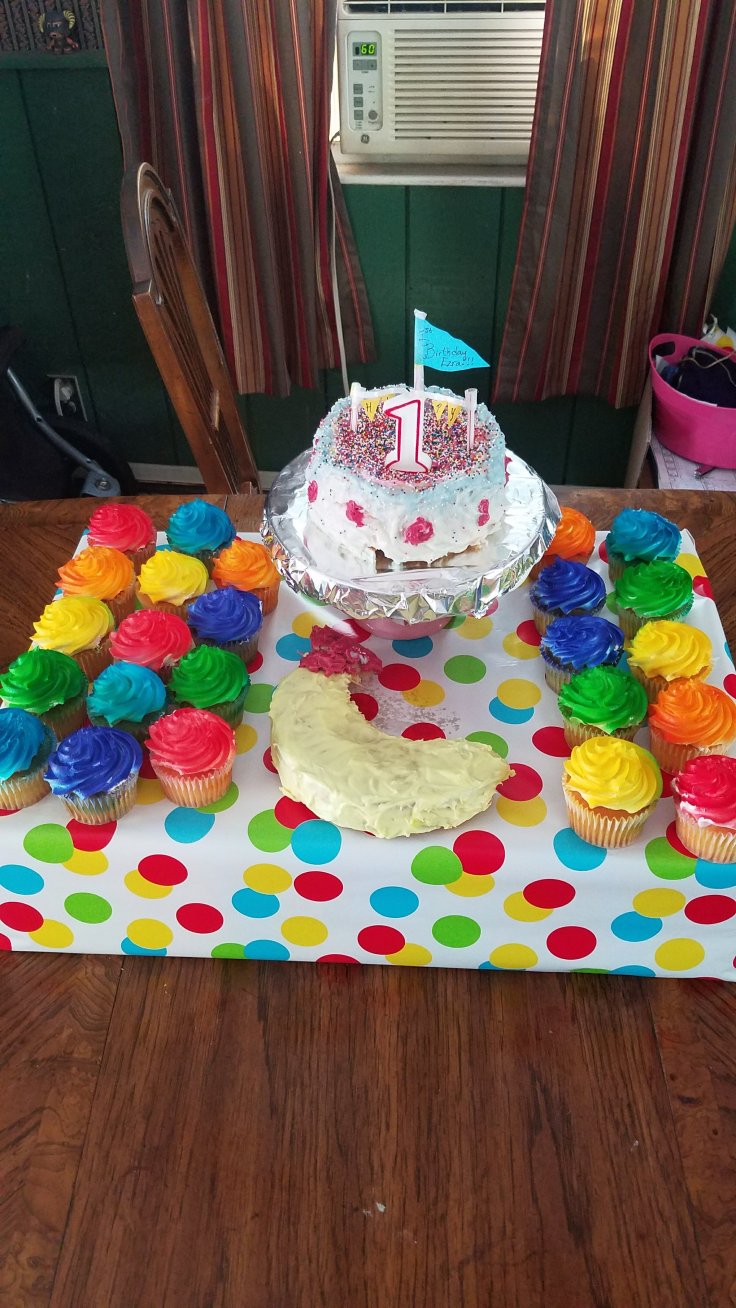 For the dessert display I simply wrapped an empty box with the fun wrapping paper I had on hand, and our dollar store cups and plates were easily transformed into the man with the yellow hat’s hat, by simply cutting a strip of black paper and taping it around the cup. We even left out a copy of Curious George’s Birthday Surprise with markers for guests to sign. By focusing more so on the overall feel of the Curious George books with the primary colors rather than the monkey himself, the theme was easily pulled together. Having a few primary focus decorations rather than an overwhelming amount of monkey faces made the party also seem more like a gathering of friends than a typical birthday party, keeping it low key and calm which was so refreshing. 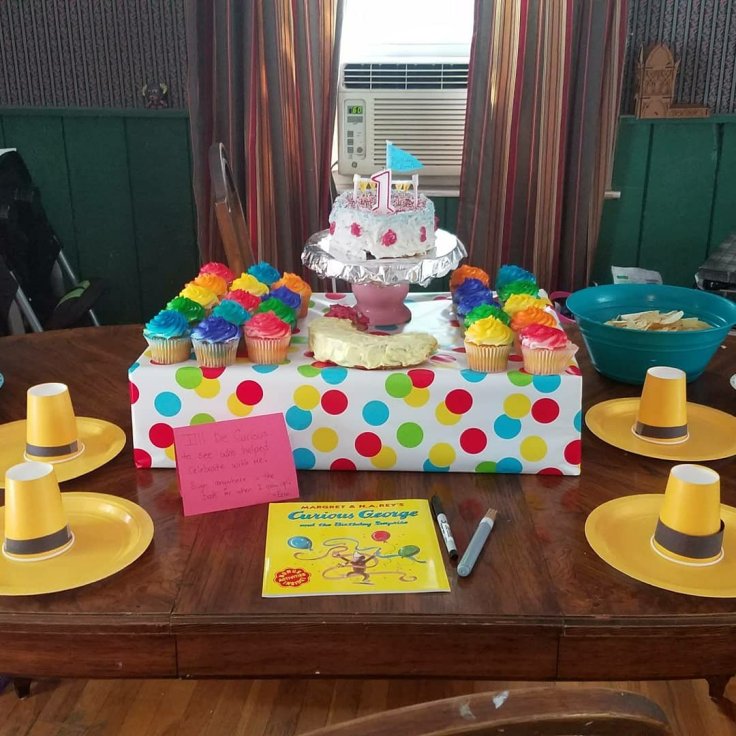 I foolishly attempted to make a cake and frosting from scratch, and even though both things came out tasting phenomenal, the execution was very “nailed it” in how it came out. (I’ll be tweaking the cake and frosting recipes slightly and saving those for another post.) End of the day little man enjoyed the cake and did his fair share of finger licking, and having cupcakes made cake distribution so much easier!

We did simple burgers and hot dogs, placing everything out in a buffet style made it a smooth, albeit crowded, feeding process for the party guests. Keeping the menu simple also really helped limit food waste and clean up which was another awesome part of having a low key party.

Ezras first birthday party was definitely curious, a lot of fun, and spent celebrating with his family and friends on a beautiful May day. We couldn’t have been happier with how everything pulled together. Next year will probably also fall into the lazy mom category, but if I’ve learned anything its that less is more and as long as you’re in good company, a party will always be a success.

2 thoughts on “A Curious Birthday: A Lazy Moms Guide”