As previously mentioned Little Dude’s second birthday was shark themed and with that came a great white sized plan of making a super cool shark cake. As also previously mentioned, I am not the best baker and my years of watching baking shows really doesn’t transfer to actual skills in the kitchen. Doubt aside, I searched pinterest and the depths of my soul to be able to create a pretty cool cake, with super minimal effort required! 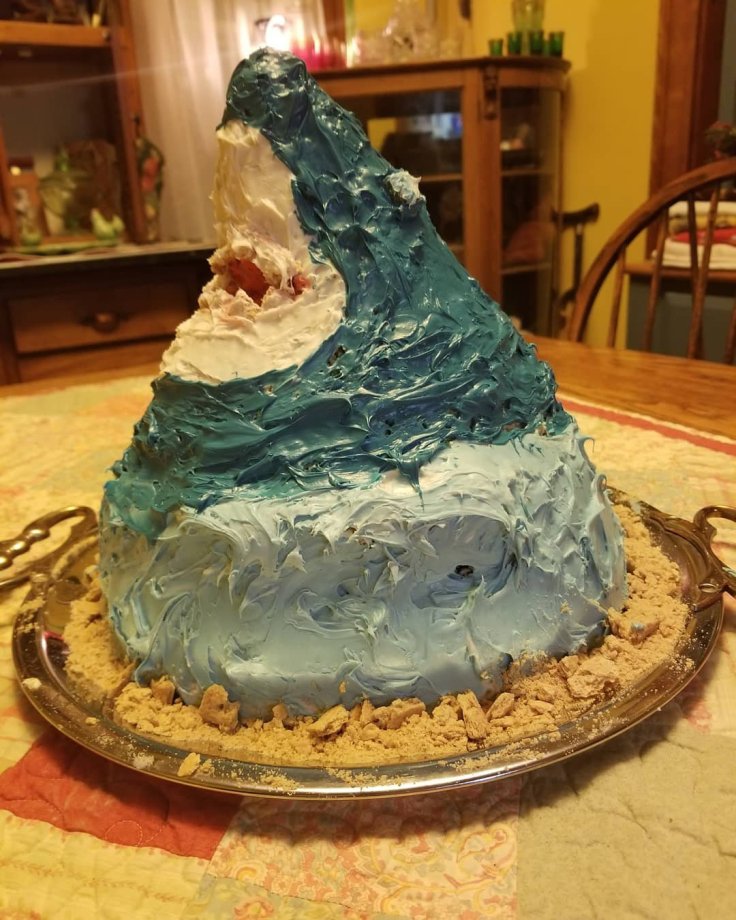 It looks awesome, was delicious, and with some crafty time management skills didn’t seem to take all that long to put together. I’ll give you all the details on how to create this beauty in my fuss free guide below!

Bake your cakes ahead of time!

I used two boxes of marble cake mix and cooked them Friday morning before work, allowing them a whole day to cool before I started to frost them. This was key to keeping stress levels low because every time I seem to make a cake I never allow myself time for it to cool and end up with a huge mess.

Box caked mix is my go to because as I’ve mentioned, baking is not my thing, and they taste good so thats all that counts right?

All I did for this cake was two round cakes to place the shark head on top, really shape doesn’t matter I just like circle cakes.

Rice Krispies are your friend!

The internet seemed to think making a shark head out of actual cake was the way to go, but that was not my jam! I made a standard bowl of rice krispie treats and then haphazardly molded it into a shark head.

Literally take the krispie mess from the bowl and once they’re cool enough to mold without burning your finger tips, start molding! I had pictures open on my phone and my husband near by to steer me in the right direction shape wise, and once I was happy with it I put it in the fridge to cool.

Save the frosting for bed time.

Once little man was asleep I took the cake and krispies from the fridge and got the party started. I took two cans of premade store bough frosting and used one to prefrost everything! Gotta keep those crumbs at bay with an extra layer of frosting! Then once everything was frosted white, I divided my other can into half light blue, the other half was then divided into a spoon of red for the mouth and the rest colored dark blue for the shark head.

When it comes to frosting the cake and shark with the blue frosting, I went for a textured look a.k.a I didn’t want to get it crumbly so I just bobbed the frosting onto the cake and shark. This ended up looking super cool accidentally but I was all for it!

The teeth were made from Graham crackers cut into triangles and then frosted white, where as the eyes were animal cracker heads I trimmed into circles with a butter knife that I then frosted into eyes. You can use whatever you want to do the teeth and eyes, I just improvised with what was on hand.

Any cake is a shark cake if you try hard enough, and with a good amount of time management it’s surprisingly easy to create!

Have any suggestions for baking or overall shark themed cooking? Let me know in the comments!